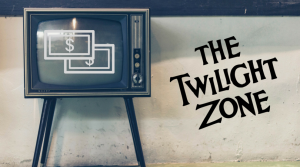 Editor’s note: This week, our associate, Dane Bundy, has penned a most thought-provoking essay that I (Wayne) think you will find interesting and convicting — I know I did! Take it away, Dane…

When I was teenager, I needed to get some tests done in the hospital. Nothing too out of the ordinary, except that it required me to arrive the next morning at the hospital sleep deprived! So the night before my tests, my mom and I pulled an all nighter. We bought a night’s supply of popsicles — or we already had them and I just ate that many — and prepared to stay awake. But the task suddenly became less daunting when we discovered that on TV that very night was a marathon of “The Twilight Zone” (original series).

What a great show! One episode will terrify you and another will bring you to tears. And what they share in common is that they make you think. Many of the best episodes are cautionary tales designed to frighten us from foolish living, allowing us to watch characters in an alternate dimension called the Twilight Zone.

Nick Ripatrazone in a Christianity Today article explains it this way, “[I]ts characters are stuck in a dimensional halfway-house, where they suffer and struggle before achieving transcendence or eternal torment. The settings change, but the stakes are always eternal.”

Rod Serling, creator and host of “The Twilight Zone” has created a fictional universe with a moral framework, a place where right and wrong actually exists. Watching Serling’s show reminds you that our earthly behavior has eternal consequences, a principle consistent with the Judeo-Christian worldview.

You can find “The Twilight Zone” on Netflix right now, and while not all episodes are as good as others, episode 28 of season 1, “A Nice Place to Visit,” is excellent. Warning: spoilers ahead.

You Get What You Want 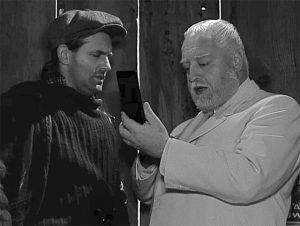 The episode opens with a man (Valentine) robbing a bank only to have the police interrupt him. As Valentine flees, the police shoot him. The scene goes black. Valentine wakes up to a man in white named Pip. As you can imagine, Valentine is greatly disturbed. Here’s part of their conversation.

Valentine: What are you after, anyway?

Pip: Only one thing, Mr. Valentine, your comfort. My job is to see to it that you get what you want. Whatever it may be. 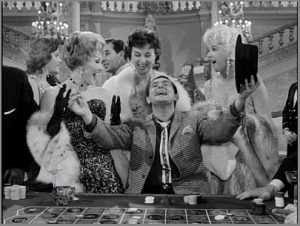 This must be the afterlife, and he somehow made it to heaven. Valentine gets whatever he wants! He spends the next month gambling, enjoying beautiful women, driving fast cars, living in a hotel of unparalleled luxury. Nothing is denied him.

But soon, this lifestyle grows monotonous and the people start grating on him. Valentine eventually pleads with his angel!

Valentine: Somebody must’ve goofed. If I’ve got to stay here another day, I’ll go nuts! Look, look, I don’t belong in heaven, see. I wanna go to the other place.

Pip: Heaven. Whatever made you think you’re in heaven, Mr. Valentine. This is the other place!

The twist! At this moment, haunting music creeps in and Valentine turns to the door of his hotel room. Locked. He keeps tugging at the doorknob as Pip launches into a terrifying laugh. The scene fades as Rod Serling gives us one last word on Valentine. “Now he has everything he ever wanted and now he has to live with it for eternity. In the Twilight Zone.”

Nothing New Under the Sun

You may have heard this story before: A man acquires everything he ever wanted only to find misery. The author of Ecclesiastes had wealth, fame, and women, too, and this was his conclusion: “…and behold, all was vanity and a striving after the wind, and there was nothing to be gained under the sun” (2:10-11).

Our present world, as Solomon and Valentine help us see, isn’t designed to satisfy us. Our wickedness — not the lack of what we want — keeps us from heaven. Be thankful God has given us Ecclesiastes and even “The Twilight Zone” to remind us that getting all that we want may not look very different from getting all that we deserve.

At LifeHouse Theater, we too are trying to tell stories that may not be new under the sun but certainly apply to all under the sun. We hope that as you live your story you’ll find and experience Christ who satisfies today and for eternity.

Dane Bundy is the president’s executive assistant and cast chaplain at LifeHouse Theater. He’s also president of Stage & Story, a ministry dedicated to connecting and equipping Christians in the performing arts.