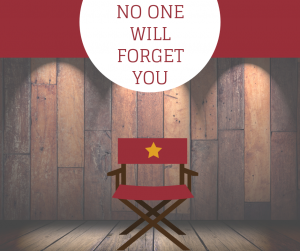 Step One: Share the “bad news” that no auditioner was good enough for the lead role, so you, as the director, will make the sacrifice and play the part.

Step Two: In the middle of at least one rehearsal, when the actors aren’t meeting your standard of excellence, storm out of the theater. Remember, it’s not what you say but what you do that shows you’re in charge.

Step Three: When blocking a scene, improvise the directions you give. Only a novice uses a crutch like forethought.

Step Four: Always focus on the big picture of the production, like re-negotiating your pay (every couple of weeks) and updating your Instagram status. Let your actors deal with the details, like scene changes and mic changes and costume changes…and blocking.

Step Five: Use theater jargon to show your formal theatrical training. Start with…“The house is all paper tonight.” And when they look impressed, finish with, “It’s gotta be our raked stage and mobile rostra. Not even our dramaturg could’ve seen this coming.”

Step Six: Show up at least fifteen minutes late to rehearsals with a Starbucks in your hand. Remember, they must know nothing happens without the director.

Step Seven: Overspend on your budget. Remember, a genius doesn’t need boundaries. As Elphaba, the Witch of the West,  sings in the musical Wicked, “it’s time to try defying gravity”!

Step Eight: If the show is a flop, blame the actors. “It breaks my heart,” you can say, “how she was never able to really master her character analysis I assigned her.”

In a previous entry (“How to Use the Stage to Boost Your Ego in 8 Steps“), I (Wayne) looked at how the spotlight can lure an unsuspecting and well-meaning actor to the stage…for the main purpose of boosting the ego. In my experience, the spotlight can also call a director…with the same sinister purpose: not to stage a great show, but make one’s name great.

Again, at LifeHouse, we are truly blessed with our directors. It’s not hard to see that they want to serve a larger purpose than their ego.

However, it’s never a waste to remind ourselves that pride is on the prowl looking for cracks to slip into our hearts and minds. In our fallen world, even the most humble person must be on guard against the ancient sin that turned a magnificent angel into a maleficent devil.

So, in all efforts, keep your eyes fixed on the Author of Creativity!