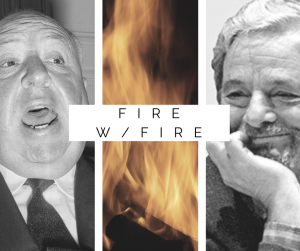 As human beings, we see the world through our own experiences and beliefs. Together this forms our worldview, or our perspective on the world. Everyone has a perspective, including artists. Yes, artists try to reflect what they see, but it’s all funneled through their worldview. I’d like to consider for a moment two celebrated storytellers and their worldviews: Alfred Hitchcock and Stephen Sondheim. 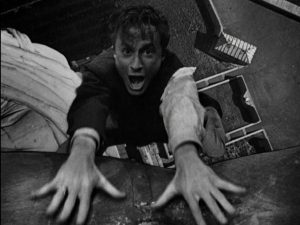 In a fascinating 1973 interview, legendary film director Alfred Hitchcock stated, “Any art form is there for the artist to interpret in the manner he wishes, for the purpose he wishes.”

When we think of Hitchcock, and his body of work, which include films such as Psycho and The Birds, we associate it with words such as “fear,” terror,” “suspense” and the like. He admitted that one of his main purposes was to entertain, but more importantly, he explained that he used his work to arouse anxiety in others because, he, too, was anxious. He found the world, cold, disquieting, and void of comfort and ultimate assurance.

Perhaps, we might say that Hitchcock wanted to pull his audience into his funk…misery does love company, doesn’t it? Or, maybe he just wanted to share his perspective on the world. If the world is bleak, call it as it is. All equal, his strategy resulted in great profits, because let’s face it, Hitchcock was awfully good at what he did.

Since LifeHouse is a musical theater, this reminds me of the celebrated composer and lyricist, Stephen Sondheim: the man behind well-known musicals such as Sweeney Todd and Into the Woods.  I’ve not met Sondheim, but I don’t need to meet him to know that he has a distinct purpose behind how he uses his pen, paper, and piano: a purpose that has been effective and lucrative.

No one who views his musical Sweeney Todd: The Demon Barber of Fleet Street can leave the theater feeling that God is in his Heaven…as you’ve just spent the last couple of hours watching a serial killer masquerading as a barber, taking the lives of his customers. And another one of his productions, performed in high schools all around the United States, lead you to question bedrock concepts like the existence of God, meaning in life, and the ability to know right and wrong. Sondheim wants you to wonder and embrace doubt on these things…just as he does.

My point in bringing up these men is not to lead a boycott against their works or tell you not to see what they’ve done. God has given these men brilliant gifts. But I just want to point out that they are using their gifts to share their view on the world.

Hitchcock and Sondheim are evangelists, too. And not all of what they have produced has caused me concern, but their films are parables, sneaking messages past our defenses, if we’re not careful.

These artists are not the enemy, even if their perspectives are contradictory to our own. The real enemy is the enemy, Satan. But do you think one as crafty as Satan will choose to ignore the powerful medium of story? No. Wasn’t it a story that he told Eve in the garden when he asked the simple question, “Did God really say that?” This simple question invoked a story: the story that God was hiding something good from them.

As a Christian, I think the answer is not to run from sinister stories, but tell redemptive ones. In different words, I think we must fight fire with fire. If our God is the author of all things, including creativity, then he is the author of the story. Christians, of all people, should feel confident to use the story: not as a weapon to unleash upon people, but as a way to join the marketplace of ideas that is alive and well on Broadway and Hollywood.

In my next post, I’ll offer two simple ways that we can fight fire with fire.

In Conclusion, now What?

Before we leave this article, here are two practical steps to implement what we’ve discussed: